In the context of US House Speaker Nancy Pelosi’s trip to Asia, the phone call between Mr. Xi Jinping and Mr. Joe Biden was an effort to help the two sides maintain communication and avoid mistakes.

On August 2, US House of Representatives Speaker Nancy Pelosi arrived in Malaysia, the second official destination of the four countries she confirmed she would visit during her Asia tour. So far, speculation about Ms. Pelosi’s visit to Taiwan has not subsided. An anonymous US official said Ms Pelosi may spend the night on the island, with it comes tensions between the US and China over the issue.

Taiwan is also one of the issues discussed between US President Joe Biden and Chinese President Xi Jinping during a phone call on July 28.

Both sides used the word “candid” in a statement issued after the call, although subsequent statements did not say whether the dialogue produced “meaningful” or “constructive” results. The differences expressed in many aspects have raised questions about the ability to de-escalate tensions between the world’s two leading economies.

The two statements are not identical

Immediately after the phone call between the two leaders, the Chinese Foreign Ministry released a statement of more than 600 words, four times longer than the 150-word content issued by the White House.

Beijing spends most of the content recounting the two sides’ statements, especially showing President Xi Jinping’s comments on the world situation, as well as on US-China relations in recent times.

The announcement from Beijing shows that it wants to emphasize that the US considers China “the main rival, the most serious long-term challenge” is the cause of strained relations between the two countries.

Mr. Biden, then vice president in the Obama administration, welcomed Mr. Xi at Joint Base Andrews in 2015. Photo: AP. 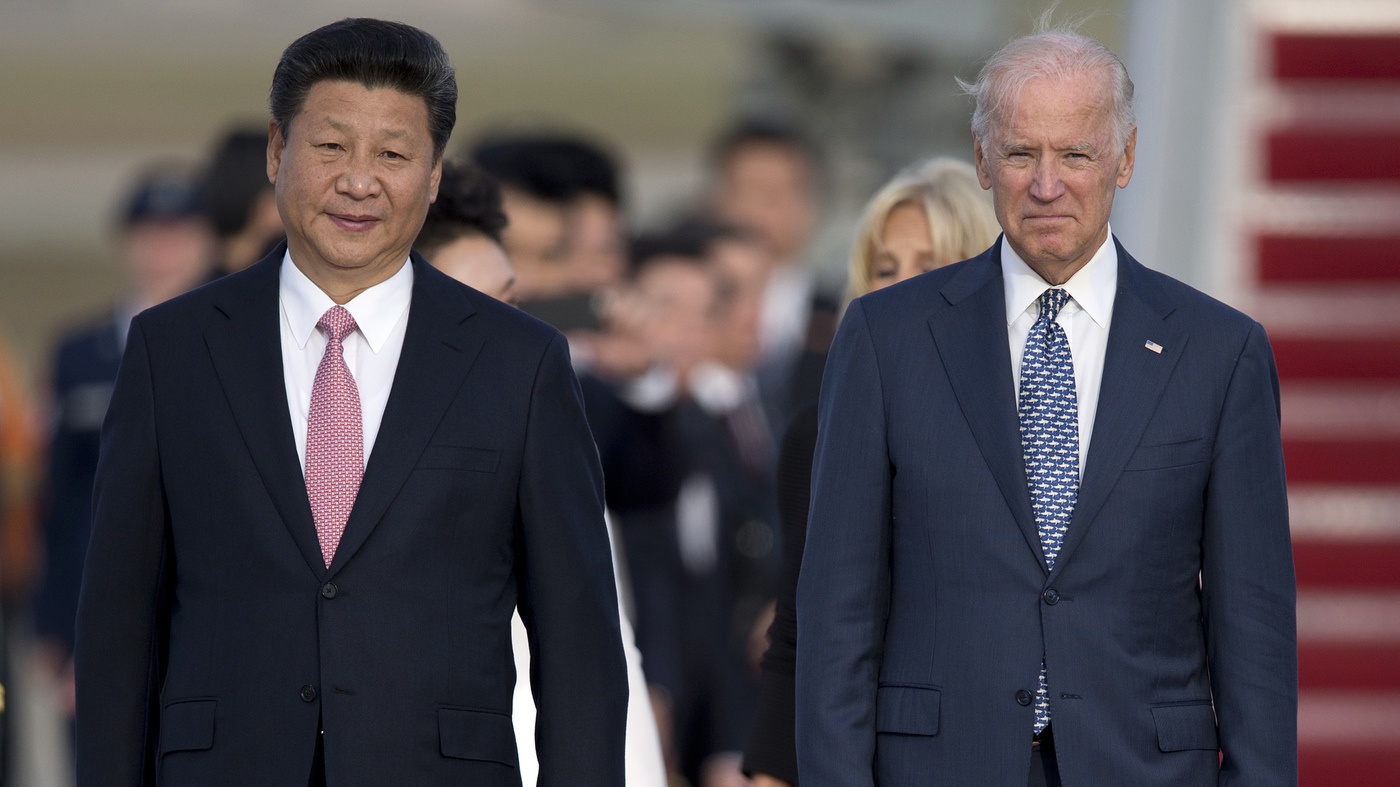 In addition, it is worth noting that the Chinese statement emphasizes the details of the phone call that took place at the request of the US side, implying that Washington is currently the party that needs dialogue with Beijing, not vice versa. .

Hours after the initial brief statement, the White House continued to release “Basic Information for the Press” about the fifth phone call since the beginning of President Biden’s term with the Chinese leader.

In this document, a senior US administration official provides more detailed information on three key points of the exchange between the two leaders, including: Discussing areas where the two countries have can work together, the Russia-Ukraine crisis and the tension related to the Taiwan issue.

He added that President Biden had plans to hold talks with Xi soon. The US National Security Adviser suggested a discussion between the two leaders during their meeting in Luxembourg in mid-June, while the Chinese foreign minister hinted at the timing of the call in Luxembourg. meeting on the sidelines of the recent G20 Summit.

This phone call came just a few days after China threatened to retaliate if Nancy Pelosi – Speaker of the US House of Representatives – visited Taiwan. Amid the turmoil in the Taiwan Strait, President Xi Jinping asked the US to respect the “One China” principle and implement the “three joint communiques” in both words and actions.

The leader stressed that China resolutely defends national sovereignty and territorial integrity, and stressed that “those who want to play with fire will be consumed by fire”.

From across the Pacific, President Biden reaffirmed his commitment to the “One China” policy, guided by the Taiwan Relations Act, the “Three Joint Communiques” and the “Six Guarantees”. According to information released by China, Mr. Biden also reiterated the statement that the US does not support “Taiwan independence”.

A senior Biden administration official said that while differences have always existed when it comes to Taiwan, the two countries have managed that disagreement over the past 40 years.

The fact that US House Speaker Nancy Pelosi expressed her desire to visit Taiwan provoked a reaction from China. Photo: AP.

In the context of world turmoil, Chinese President Xi Jinping affirmed that China and the United States – as two major countries – have the responsibility to maintain peace and security and promote world development and prosperity. prosperity.

Sharing his views with his Chinese counterpart, President Biden repeatedly emphasized the importance of maintaining an open line of communication to ensure that the two countries can manage their differences and work together on areas. common interest.

According to Mr. Biden, the US-China cooperation not only benefits the people of the two countries but also other countries around the world.

Although affirming the need for coordination, it seems that the joint working groups of the two countries have not yet found common interests and concerns.

In a brief statement after the phone call, the White House pointed to several areas where the two countries could work together, including climate change and health security.

Thus, there is a large gap between the two countries’ initial positions on the areas in which the two countries are able to cooperate, because each side is just voicing their own views and has not really intended to compromise. Therefore, the two countries finding common ground on this issue will require a lot of efforts in the near future.

Although announced by the White House as one of the three focus of discussions between the two leaders, the issue of Ukraine was only briefly mentioned in the statements of each side. The phone call did not create consensus, because both China and the United States maintained their positions from previous exchanges between the leaders of the two countries.

Besides warning that supporting Russia in the war with Ukraine would be seen as crossing a “red line”, US officials are also closely watching moves from Beijing, in the hope of economic sanctions. Economic and arms aid can be a warning to those taking risks in Taiwan.

A Hong Kong resident watches the news about the phone call between the two leaders of the US and China, on July 29. Photo: Reuters. 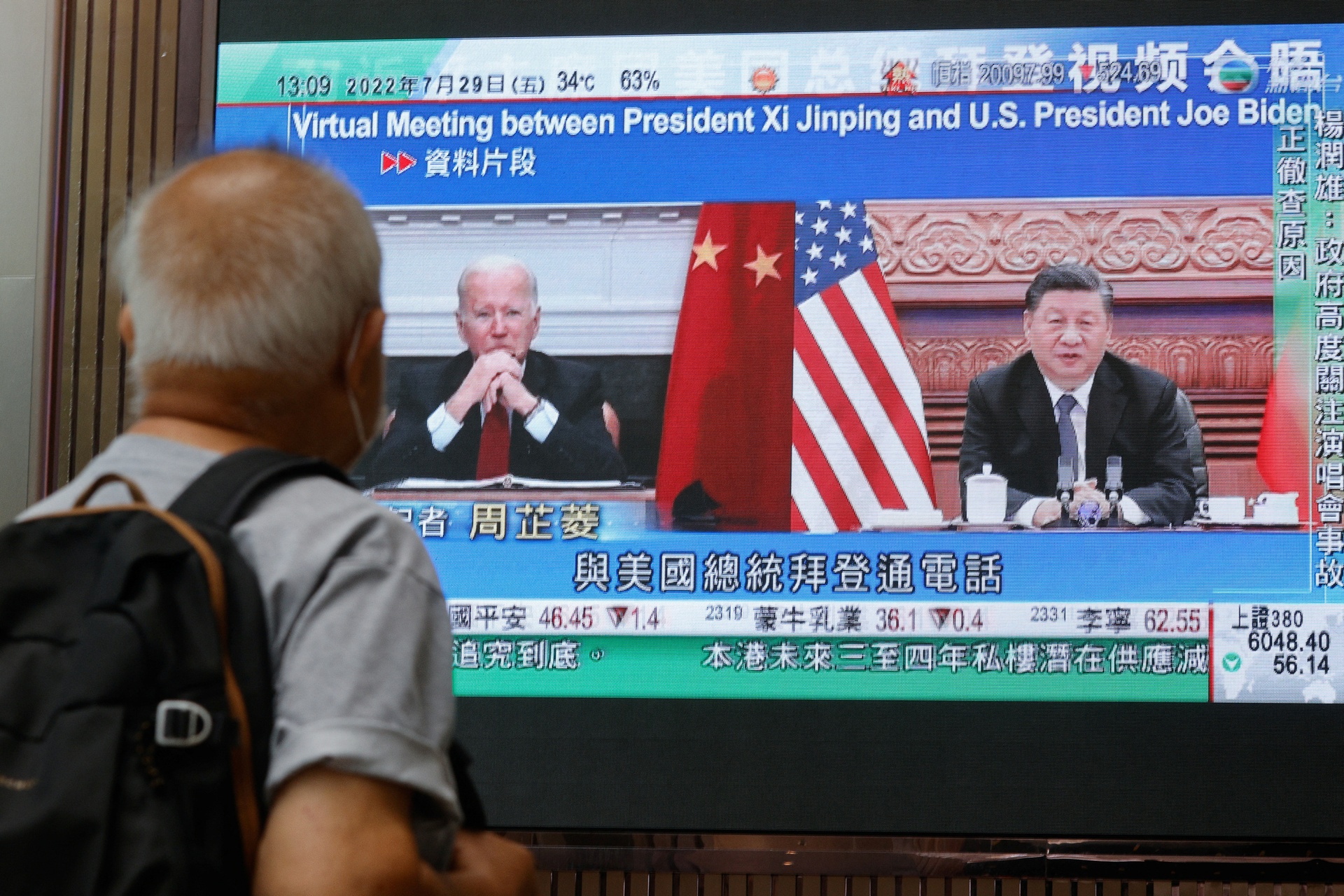 Through the contacts between the leaders of the two sides, especially since the phone call on July 28, the Taiwan issue is the most important and difficult knot in the relationship. In addition, removing the deadlock in negotiations to remove trade tariff barriers is also considered a key point for future exchanges between the two countries.

According to some experts, the news that Nancy Pelosi – a senior US lawmaker – plans to visit Taiwan during her Asian tour has fueled tensions between the US and China.

Because China is now entering a sensitive period when it is preparing for a series of important political events.

The White House declared the trip to be the decision of Ms. Pelosi and that President Biden could not interfere with the decision of the head of the US House of Representatives.

But Dr. Lu Xiang, director of research at the Chinese Institute of Hong Kong, said Beijing would not accept this argument, because “Pelosi’s trip would not have been possible without the agency’s assistance. law enforcement,” Global Times reported.

According to Foreign Policy, if not careful, Ms. Pelosi’s trip could lead to a huge mistake. Therefore, the US military is said to be preparing many scenarios to deal with potential security risks.

Disagreements and differences in official information released after the phone call between the two leaders show that US-China relations cannot immediately improve.

Some analysts say that the most significant outcome of this exchange was the two sides’ efforts to maintain communication to resolve differences and avoid missteps.

At the end of the dialogue, the two leaders are said to have agreed on a plan to hold a face-to-face summit in the future.

Sources familiar with the matter said that contact between officials from both sides is likely to happen on the sidelines of the G20 Summit in Bali or the Asia-Pacific Economic Cooperation (APEC) Forum in Bangkok later this year.

A picture of the cuteness of cats while they are together. Of course, cats...

As we all know, cats are capable of being extremely affectionate and affectionate when needed. and also very good at demanding attention as well. When the meow's call sounded, the slave rushed forward to find...
Read more

A rare photo of a sleeping whale just 10-15 minutes a day.

sperm whale or sperm whale It is the largest toothed whale. Their full length reaches 20.5 meters and weighs 57,000 kg. They live in water depths of 300-800 meters or more. Underwater photography expert Franco Banfi has been tracking...
Read more